Happy Thanksgiving to all at DNForum

The first one was held 400 years ago on November 25, 1621 at Plymouth Rock where the Pilgrims had arrived after being persecuted. Today, it is 400 years to the day.

“Thus out of small beginnings greater things have been produced by His hand that made all things of nothing, and gives being to all things that are; and, as one small candle may light a thousand, so the light here kindled hath shone unto many, yea in some sort to our whole nation; let the glorious name of Jehovah have all the praise!”

Earlier in the year, the Pilgrims had left England on the Mayflower. It was just 41 men on a journey that took 67 days. They arrived with a mission to create a noble and honorable nation. I am not sure they could have fully imagined what would have resulted -- in many lays the groundwork was being laid for what was to become the United States of America.

The example of the Pilgrims is what Christians call a "Mustard seed". You plant it faithfully and then tend to it diligently, knowing that ultimately we are dependent on God’s providence for anything to come of it. For anyone who wants more info on the 400th occasion of Thanksgiving, here is a great site: https://400th.org/

In the meantime, from the Monster family, I extend to you all a special greeting from the youngest member of the family: Henley, who decided to perch herself in the midst of a festive setting for the Thanksgiving occasion! 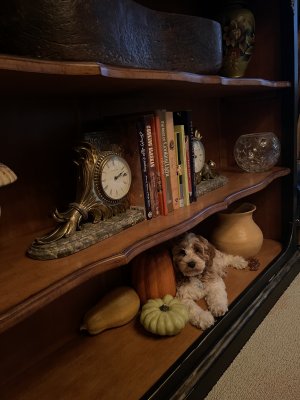 Feedback: 67 / 0 / 0
Hope you all had a wonderful turkey day.
Start using the Number 1 domain registrar—Epik—today!​

We have leftovers and dispatched them accordingly.

Much to be thankful for though. Stay thankful!
H