This is a discussion about the domain name register/company Namecheap.

Feedback: 17 / 0 / 0
I was part of a domain auction and ended up losing the auction to another bidder. That winning bidder tried to sell the domain before paying for it and didn't pay for the auction at the end since they couldn't find any offer within 2 day time period.

I was offered the domain for purchase but the problem was that the winning bidder had 17 bids in total and they only voided the winning bid. They wanted me to pay $2915 without removing the other bids. I went back and forth with their customer service team and they wouldn't see the issue. Worst of all their customer service team wasnt even reading the support ticket properly before sending the reply.

and then when they cancelled the auction the next day, they sent me the opposite e-mail: 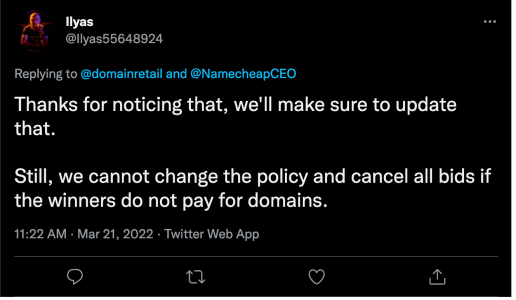 This post is to warn others when you're offered to buy a domain that winning bidder didn't pay. Check the bidding history before paying.

Feedback: 0 / 0 / 0
They should simply reset the auction if the second highest bidder or third highest bidder is unwilling to pay their last bid price on being offered the domain name - for whatever reason they decline. Of course the words used and the arm twisting is a real put off for sure. I hope someone from NameCheap can come here and clear things up for the domaining community so that the trust is restored.
R

Feedback: 0 / 0 / 0
I do not know the feasibility of this, but how about if they place a hold on funds for bids over a certain amount, in order to avoid such activity?

For example, for auctions which go over say $500, 10% of the bid price is placed as a hold on your credit card used for payment. So if you want to bid say $1000, then $100 is held on your card BEFORE the bid is actually placed. If you up your bid to $1500 then of course the $100 hold will be removed, but the new $150 hold will have to be approved before your new bid gets placed.

If I were to bid on a higher priced domain I would have no problem doing this, as long as there were no stupid conditions attached like awarding the auction to the second highest bidder if the highest bidder fails to pay - the auction was already tainted so it should be restarted from scratch, and cunning domain owners could sacrifice 10% of proceeds to inflate the final price, so the winner should lose that 10% if they don't pay.

But somehow I get the feeling that this corruption in bidding benefits the auction houses and they will likely not try too hard to put a stop to it.

Thanks for sharing. @silentg

Learn more about Auctions Bidding Guide. Find your answers at Namecheap Knowledge Base.

Jul 12, 2022
ibuyandselldomains
I
P
other Namejet is it dead or dying?